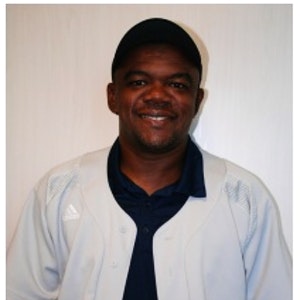 Hi, My name is Bunmi. I have been teaching tennis for over 15 years. I was born in Lagos, Nigeria and am now a Citizen of the United States. I was the Head Tennis Professional at the Jewish Community Center in Tampa, Florida. I was a Site Tennis Director with the New York Junior Tennis League in New York City.

As a player, I was ranked Top 10 in the nation by the Nigerian Tennis Association, and also won several Junior Tennis Championships in the 1980’s. I have also participated in ATP (Association of Tennis Professionals) tournaments. I attended Florida Metropolitan University, from which I received a Masters degree in criminal justice as well as a Bachelors degree in business management. I also attended the Van deer Meer Tennis Academy in South Carolina in 1997. I have been a certified member of the United States Professional Tennis Association (USPTA) since 1999. Currently I am an Elite Professional.

Most recently, I won the Fort Worth area Drills Contest and was chosen to represent Fort Worth at the 2010 USPTA Texas Division Annual Conference February 14, 2010 held in Fort Worth Texas.

Bunmi is awesome. 5 minutes in and more instruction then 2 hours before. He is a relentless coach. Thanks for your work in helping pair us.

Bunmi is very good at teaching tennis lessons to my children, and he is very encouraging. He's also very professional and responds to emails/texts in a timely manner. I would highly recommend him for tennis lessons.

My teen has had 2 lessons with Bumni and I can already see an improvement in her playing. He is very knowledgeable. My daughter looks forward to every lesson.

Yes, I can travel up to 45 miles to a tennis court in your area.