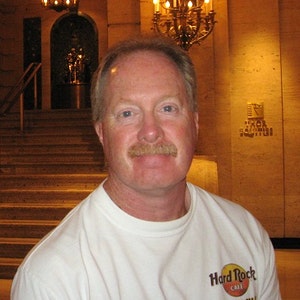 I started playing tennis when I was 13. I was self taught and played on a college team (Ohio University-Lancaster) for 3 years. In 1977 I attended Dennis Van Der Meer Tennis University in Sweet Briar, Virginia and was certified as an Instructor in the U.S. Professional Tennis Registry. I taught for 2 years for the local Parks &; Recreation in Lancaster , Ohio. I have also taught at the college level for a total of 3 years. In 1979 I joined the Army after receiving my B.S.E.D. in Physical Education from Ohio University in 1976. I taught tennis full time for 6 months at California, and Arizona as part of the Western Region Recruiting Command and at Garmisch/Partenkirchen, Germany at the Armed Forces Recreation Center. My main job was organizing leagues and field/ court/ golf course maintenance while I was at both Fort Lewis, Washington, and Grafenwoer, Germany. After leaving the active Army I was hired as an Outdoor Recreation Director for Grafenwoehr and the 7th Army Training Command. In 1984 I was offered an Outdoor Recreation Programmer position at a larger Post in Wuerzburg, Germany, where I was certified as a Ski Instructor and continued teaching tennis as well as skiing. I have had teaching experience on the same red clay courts as the French Open and have learned how to build clay courts. Upon returning to the U.S. I worked at Jefferson City Racquet and Fitness Center, in Jefferson City as a racquetball coordinator and tennis instructor. I have also directed and taught tennis for the Jefferson City Recreation Department (1988). Since moving to St. Louis I have worked at West James Courts as a Manager and club racquetball/tennis director (1989-1992), and Town & Country Racquet Club,(1995-1998) as a Fitness Director/Tennis Instructor/Massage Therapist. I have been the tennis director for Fenton Parks &; Recreation for 2 years from 1998-2000. I have also coached tennis at Whitfield High School, Ursuline Girls School, and Webster University, each for 1 year and currently a coach at St. Louis University High School for the Junior Varsity Tennis team since 2013 with an undefeated record for the past season.. I am currently teaching in the Physical Education Department on a part time bases at both Wildwood and Forest Park Community College campuses, where I have taught tennis for 3 semesters.I am also a certified U.S.T.A. Official and have officiated junior as well as college and Professional matches.

I teach n the.P.T.R. system which is very organized and structured to meet all needs and strokes. My lesson format for beginners and intermediate players is to start with the serve followed by the forehand, backhand, volley and overhead, reviewing each stroke as the lessons progress. For advanced players those areas that the player wishes to concentrate on will be addressed with drills and competitive situations.

My son LOVED his experience! I feel like he learned a lot in his first hour and he’s excited to keep going.

Steve does a through job explaining the mechanics of each swing and different strategies in tennis. Steve was willing to meet us at least half way for our lessons.

Very nice and experienced coach! As a beginner, I learned a lot about tennis and truly enjoyed the training process.

My son is 13 and has not played tennis before. He lives in Germany, but he is visiting with me for the month of August. Steve gave him 10 tennis lessons over the month. I have to say that Steve is really an excellent teacher. He's patient, personable, and very knowledgeable. My son learned a lot, and had fun doing so. My son now has a basis on which to grow his tennis skills. Thanks Steve - great job!

Very good at showing, explaining the lesson and correcting my attempts at executing the technique he is demonstrating.

Yes, I can travel up to 9 miles to a tennis court in your area.