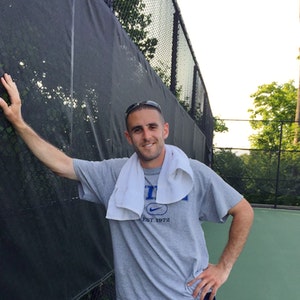 Hi my name is Matthew. I have many years of coaching experience working at various tennis camps ,and indoor clubs throughout Long Island. As a junior player in the USTA I was ranked in top 35 in the eastern section. I was also an All-State singles player for Plainview JFK High School. In my collegiate career, I played the number one singles and doubles position for SUNY Oneonta while earning conference player of the year for the NCAA Northeastern Athletic Conference in my final season. I received my training as a junior player from many elite coaches in Long Island, one of which was twice the USTA Eastern section coach of the year. Through the high level of coaching that I received as well as my playing experience, I have developed my own unique style of teaching. I have taught all levels and ages over the last 12 years and have had much success. During the indoor season I teach at the notorious Robbie Wagner's Tournament Training Center in Glen Cove, and during the spring/summer months I am the director of tennis at the Muttontown Club, where I am able to bring non-members in to play and take lessons.

I start from the ground up. My first lesson with a new student always begins with analyzing current technique and form. From there I make the necessary corrections or adjustments. I also emphasize special footwork drills that I myself practiced as a high level junior and collegiate player.

He is an amazing teacher and very experienced. My game improved a lot in just two lessons.

Matt has many commendable qualities as a tennis instructor/coach. Consistent with his profile, he is excellent at technically diagnosing problem areas and perhaps just as important, enjoys tackling them with you. He helps to set priorities with respect to what areas of one's game should be worked on first, second etc. He does not, as many instructors seem to do, hit a lot of balls to you without a purpose. He is definitely not about reinforcing bad habits but focused on helping you improve. I've had a lesson or two from different instructors over the years, and never continued to pursue. Matt is a keeper! You walk away from a lesson not only with a clear understanding of what your technique should be but also why, and as a bonus, how you can work on them between lessons. His help has already improved my game after just 3 lessons. Obviously, I am enthusiastic about Matt. I could go on but let me close by saying that he is also both extremely personable and generous. Highly recommended!!!

Matthew is great with kids. He is very professional and courteous. He is an excellent teacher! I would highly recommend Matthew as a tennis instructor.

After not having played tennis in 5 years, I feel like Matthew has revolutionized my game in just the 6 lessons that we had. He separated each stroke into a series of movements that I could follow and patiently helped me until it would click. Almost every ball that I hit Matthew would have feedback about not only what I could have done differently but also what I did well, which was very encouraging. Overall Matthew was an excellent instructor.

Yes, I can travel up to 6 miles to a tennis court in your area.