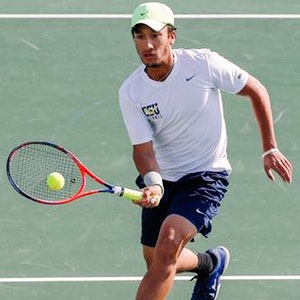 Jorge is originally from Colombia, where he achieved 7th position in the under 18s ranking, and played ITF junior tournaments all over South America. After his career as a junior, Jorge was recruited to play Division 1 college tennis at Tennessee State University where he played for 2 years before transferring to Coppin State University (CSU) in Baltimore. During his 2 years at CSU, Jorge played at the number 1 singles spot, was named captain of the team, earned the MVP award both years, and earned the All-MEAC conference team award.

I focus on structuring the lesson around your goals. For example,If you want to be more competitive and start playing tournaments, I would help you to work and strategy and point development.

Jorge is a great instructor. He works me hard, which I like, and is encouraging at the same time. I’ve only taken two lessons so far, and I’m already noticing significant improvement in my ground strokes, volleys, and serves.

A great experience. Coach helped me in my tennis techniques as well as my mental game. I highly recommend this coach.

I have been having lessons with Jorge for quite a while. He has helped me to improve my game very quickly as well as to be more competitive. He is a great coach. He helped me improve my tennis skills as well as my fitness so I can be a more complete player. He focuses on working around your goals. I definitely recommend him!