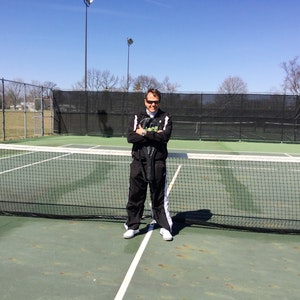 Hi, my name is Jon. I am a former two-time state high school singles champion from Columbus, OH. I played on a full tennis scholarship at Texas Christian University for two years before finishing up my collegiate career on a full tennis scholarship at The Ohio State University where I was nominated to the All-Big Ten First Team in 1979. In 2000, I was voted by the Columbus Dispatch as one of the top 100 high school athletes in central Ohio for the entire 20th century. I was ranked as the No. 1 singles player in the Ohio Valley Tennis Association from 1972-1974 and no. 3 in the Western Tennis Association during that same time period, qualifying on multiple occasions for the national junior singles tournament in Kalazamoo, MI. Following my collegiate years and after playing on several satellite tennis circuits , I taught tennis as a full-time instructor at the Kettering Tennis Center from 1979 to 1981 and at Wickertree Racquet Club in Columbus in 1982 working with all age groups and levels before entering law school and practicing law for the past 30 years. I have stayed involved in tennis throughout that time period on a limited basis, however, following my recent retirement from law, would like to resume teaching tennis.

My lessons are built on stressing proper movement and footwork (obtaining a workout), having fun and coming away from the lesson with several helpful stroke pointers and strategy features to implement when practicing on ones own time. With beginners and intermediates, I strive to teach consistency of fundamentals, thereby establishing proper muscle memory within both the stroke and footwork framework. Due to my rich and accomplished history as a player, when working with advanced players, I stress and teach positive visualization to properly prepare for upcoming matches and tournaments. If a student is already obtaining effective results with a particular stroke, I endeavor to work within the framework of that stroke rather than attempting to "fix" the stroke. I also seek input from the student, particularly advanced players, as to the aspect of the game they prefer to focus upon. I emphasize "patterns" of how to effectively develop a point/ strategy for advanced players rather than mindlessly hitting the ball over the net. This serves to create winning results by stressing the strengths of the particular player and exposing weaknesses of any given opponent.

My 4 year old daughter enjoys her lessons. He made it easy to understand. He definitely has the needed patience for a pre-schooler!

Jon is a Great teacher and explains everything very well. He has exceeded my expectation.

Both my teenager kids are beginners and they really like their lessons with Coach Gurian. I am amazed at my kids' progress in tennis after just a couple of lessons!

Jon is an experienced coach and uses a lot of simple yet effective techniques to make learning the sport easy !

Jon is a wonderful tennis coach. He excels at the most important of all coaching function, he instills confidence. Each lesson I came away from the court feeling like I had a new tool in my bag to play better. His concepts are clear and he doesn't waste time in lessons. He is very good at showing you how to be the best player you can be. I would recommend Jon without reservation.

Yes, I can travel up to 60 miles to a tennis court in your area.