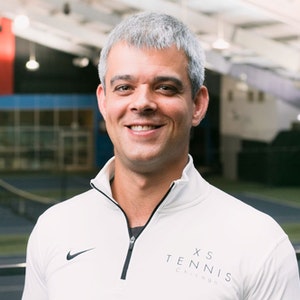 Coach Terry loves the feeling of hitting a tennis ball. Coach Terry grew up playing baseball, basketball, hockey, football, and many other sports. Terry loved to compete in midwestern and national tournaments as a junior tennis player. He has fond memories of traveling to tournaments with his father who served as his coach growing up. He enjoyed playing 4 solid years for his high school, Glenbrook South, in Glenview, notching two undefeated regular seasons, and three straight quarterfinal appearances in the Illinois State High School Championships. He was nationally ranked as an 18 and under junior and went to Penn State University on a scholarship to play tennis. Coach Terry earned his bachelor’s degree from DePaul University in 2004.

I like to identify what a player needs to work on early in a lesson. I like to get things started with a nice warm up, having the student hit a few balls up close at the service line or from the baseline. I identify with the student what mistakes are occurring. After identifying what kinds of errors are occurring, e.g. the ball is going long, or the ball is going into the net too often, I will give the student an opportunity to correct the mistake on their own. I will ask them, “So you are missing into the net, why is this happening and what can you do to hit more shots above the net?” Since every player likes to use slightly different grips and likes to hit with different spins, this method will help the student ‘find their game’ more easily. I then incorporate a drill or game that specifically addresses the change that needs to be made, e.g. the student must hit the ball over a string that is four feet over the net, or the student must hit topspin on every ball to bring the ball in. By giving the student an opportunity to really focus on making their game better by using their mind, along with my suggestions, coaching tips, and check ins, I believe the tennis player will be more confident because they have really internalized the change.