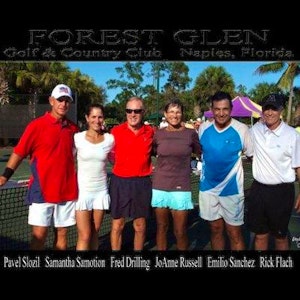 I played on the tennis team while earning a mechanical and aerospace engineering degree from the University of Missouri - Columbia. I also did graduate study in the field of physiology at my alma mater. In 1998 I passed all four of the USTA Sport Science tests.

I played on the ATP tour from 1976 to 1981 and achieved a world ranking in the 300s in singles and 200s in doubles. I won minor tour events in the United States, France, Holland, Germany, India and Central Africa. I also played professional club tennis in Germany from 1977 to 1981, in Kaiserslautern and went undefeated for five seasons in singles and doubles.

Ken earned a ranking of 44 in singles and No. 1 in doubles. He won titles at Wimbledon, the U.S. Open and Italian Open, and a gold medal at the 1988 Olympics.

Doug was ranked in the top 100 in singles and doubles, and had wins over Andre Agassi, Patrick Rafter, Thomas Enqvist and Ivan Lendl in singles.

I also coached the Washington University men’s tennis team from 1989 to 1998 and was the University Athletic Association Coach of the Year in 1995.

I coached the World TeamTennis franchise, the St. Louis Aces from 1994 to 1996 and was awarded the WTT Coach of the Year in 1996 by Billie Jean King.

My two children were both international level tennis players.

My daughter, Niki, is a former conference player of the year in the Patriot League and a graduate of the United States Military Academy at West Point. But more importantly she distinguished herself in combat in Afghanistan and was awarded the Bronze Star.

My son, Ricky, played on the ATP tour and attained a world ranking in doubles before injuries ended his tennis career. He is currently a professional poker player.

I have worked with players from all levels of the game and have a unique knowledge and skill set to help any player who wants to improve. I am not a ball machine. I only work with players who want to learn and work on their game to play better and to enjoy their tennis more.