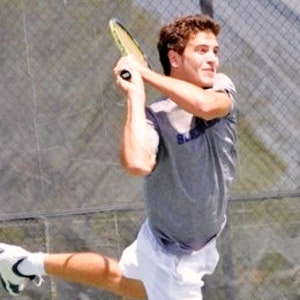 Hi, my name is Ned. I’m originally from London and am the former under 14 British national champion. I was ranked in the top 5 in Britain under 18, achieved a junior wold ranking of 210 and have competed in 40 countries during my time competing on the ITF world junior tour. I came to the United States five years ago to play NCAA tennis. I played one year at Baylor University and three years at St Edward’s University. I played no. 1 singles and doubles and defeated University of Texas no. 1 singles and doubles my senior year.I spent four years working with high school players who are hoping to get college scholarships and also have experience working with USTA Ladies 4.0 groups. I enjoy teaching players of all ages and skill levels.

Typical lesson structure would be 30 minutes of rhythm/technical work on groundstrokes, serves/return of serve. Always finish with some point play.

Ned is a great guy. He knows everything about tennis and is very easy to learn from his classes. I always get great advices from him and my game has improved a lot with his classes.

Best tennis pro around. Breaks down swings. Corrects what needs to be corrected then uses drills to reinforce proper technique. Go with Ned. He will exceed your expectations.

Ned is an awesome coach, he is very good with kids he has tremendous patience and his drills have definitely improved our kid's tennis game. Ned is an active player who plays in a lot of tournaments and who is in sync with modern techniques. I would definitely recommend Ned as a coach for any age groups.

Coach Ned is an absolutely superb maestro extraordinary teacher of tennis! And he is also a very nice fellow! I will come back to Austin again for at least a half-dozen lessons if not more and I don't even live anywhere near Austin! That is to say I will fly all the way from New York!

Everything went great with Ned! I feel like my game improved a lot, which is very satisfying! I would be interested in taking more lessons with him in the future. I had a great time, thanks a lot!

"We loved the class with coach Ned! Thank you for everything MTL!"

Ned is super patient with the students, very respectful and very punctual. On top of these important character traits, he knows his game and has the wonderful skill of transmitting his knowledge to his students. I recommend Ned to work with all kind of people: men, ladies and juniors.

Ned is the best tennis coach I've ever worked with. By far. Ned was an actual professional player on tour until very recently and working with someone of that caliber is a totally different experience than a guy who has been teaching 50 lessons per week for 10 years. As a real, active pro, he is incredibly observant and effective. He has to be. Most tennis "pros" run drills, reiterate the basics, etc. It's a great workout and should improve your game. Nothing wrong with that! But, a lesson with Ned is totally different. He is relaxed and fun, but totally engaged. He steadily gives me and my wife very specific, small ideas and adjustments tailored for exactly where we are at that moment. It's easy. We're having fun. We're not overwhelmed. And, we're hitting like we've never hit in our lives. It feels so good. I am a beginner and my wife is a real total beginner. Ned has us both loving tennis and playing a complete game. I have spent my life over-hitting and for the first time, I am relaxed and in control. Effortlessly killing it like I always imagined. It is so fun. Oh, and Ned is very professional, responsive, considerate, fun and laid-back.

I have always been very happy with Ned. He is an excellent coach, explains the game very well, and knows how to fix the mistakes in a student's game or point out the tweaks that are needed. He very quickly understands the tweaks that need to be made.

Ned was a really great tennis coach. He was patient, positive and did a great job of pointing out developmental areas. He ran good drills and very much developed the lessons to fit my abilities. I am happy to recommend Ned- he was pleasant and effective as a tennis coach.

Ned is very patient and friendly. He encourages her to do well and focus.

Very knowledgeable, patient and are continuing lessons with him.

In Austin, TX, and environs, Ned is the best tennis coach who charges less than $100/hr. If he is not the best, then he is among the top 5. Let me tell you why.

I believe that the efficacy of a tennis coach in improving a student’s skill can be summed up in three factors: the coach's skill level, wealth of knowledge, and communication. While the first two factors are positively correlated, they are not perfectly so: a coach's knowledgebase of exercises, drills, correct technique, etc. can and often does exceed his or her own performance profile as a tennis player. For example, there are many competent instructors who (let’s be honest) themselves play as 4.0-4.5s and who can adequately diagnose problems in your game and prescribe approximate remedies that work so long as you are actively working with those coaches. Indeed, I (myself a 4.0) spent years working with such coaches at $40-$60/hr. The problem is, I would improve for a few weeks, maybe a few months, and then return to my previous baseline, my old muscle memory creeping back in. The self-directed drills and exercises my old coaches gave me took me only so far and for only so long. I am not sure it would have been possible to cement the ephemeral gains I acquired, but if it had been, I believe I would have needed to work with those coaches two to three times as long as I did (which was usually six to eight weeks). Doubtless I benefited to some degree from their advice and training in the long-term. But the rate of improvement and progress was frustratingly slow, and, once the lessons were over, fleeting.

That Ned's instruction will produce both rapid and permanent improvement to his student's game is what sets him apart as a coach. I worked with him for six hours on my serve, which had been buggy for years. In a little under three weeks, I went from double faulting on average one to two (and yes, sometimes three) times per service game to double faulting once in 10 service games over the course of a match. I can hit the serve with much more authority, control, pace, placement, and spin than I ever could before, and this has translated to a total change in psychology on the court: knowing you can rely on your serve liberates you to strike your groundies with much more authority and looseness. Over the course of our six meetings, Ned was able to explain to me precisely what I had been doing wrong and why, multiple avenues by which I could correct those faults, and how to determine when they are creeping back into my game. In addition, he has given me a number of prophylactic exercises, techniques, and heuristics to maintain my form on the serve and correct the faults if they return in the months and years to come.

I mean no disrespect or lack of appreciation to my previous coaches, all of whom are honorable people and capable tennis players. But when I compare them to Ned, I have to ask: what accounts for the very striking difference in instruction? I can only conclude that the difference comes primarily from Ned's pro-level tennis ability and, secondarily, his communication skills. Ned, a Brit, is the same age as, knows, and grew up playing Novak Djokovic, Andy Murray, Juan Martin Del Potro, Marin Cilic, and others. Ned was a Division I tennis singles and doubles player in college (at Baylor and St. Ed's), and played a number of futures tours around the world in his early and mid-20's. He had an ATP singles ranking for the time he played. He can hit a 130 mph serve. He can hit a 90 mph forehand. When you rally with him, how hard you are trying compared to how effortlessly he gently puts your hard-struck winners back into the court is humbling (Google David Foster Wallace’s article “The String Theory,” on 1990’s ATP top 100 player Michael Joyce, for a much more thorough and eloquent account of this humility.) Simply put, Ned’s experience on the pro circuit, innate talent, and overall skill level are, as far as I can tell, shared or exceeded by only a very small sliver of tennis coaches charging less than $100/hr. Finally, Ned doesn't leave you struggling to understand what he’s trying to say when he diagnoses problems in your game and suggests ways to fix them. He communicates clearly, cheerfully, and precisely, meaning you make a lot of progress quickly. Finally (not that this matters to me, but it does to most), Ned is the quintessence of positivity and empathy toward his students, and a consummate gentleman to boot.

Before I signed up to take lessons with Ned, I was driving home after a particularly bad match in which my old serve had once again failed me. I meditated on all the years of effort I had put into improving my serve, to no lasting avail, and all the money I had spent on racquets and balls. At some point I thought, “In light of the thousands of dollars I’ve spent on this sport, if I could pay $500 to fix this Achilles heel in my game, shouldn’t I?” An affirmative answer to that question is what convinced me to seek out the very best instructor I could afford. $75/hr isn’t cheap, but Ned is worth every penny and more, and the value of his instruction to most player’s games is several times the value of the instruction that one usually obtains for $50-60/hr. With the right attitude, commitment, and work ethic, you will make strides with Ned that you never thought possible, in very short order indeed.

Ned is a great teacher. He combines an scientific understanding of technical mechanics with a natural teaching ability to convey intuitive felt movement. I've been really pleased and can't recommend him enough.

Terrific instructor. Ned is extremely thoughtful, diligent and creative in his instructions and very personable. His approach is to first analyze each aspect of your game and then work on distinct features - provides excellent suggestions and results in a very enjoyable and useful session. Would recommend to anyone interested in lessons.

I have many years of bad habits that Ned, through patient demonstration, has managed to start to change. My shots are more successful and I am enjoying my tennis even more now. I can recommend Ned without hesitation - best coach I have ever had.

My daughter really liked the way he was teaching.